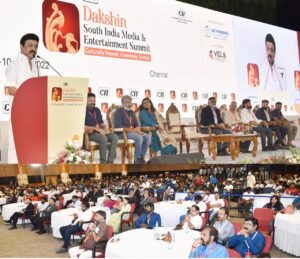 Chennai: Urging filmmakers to come out with films that awaken the society, Chief Minister MK Stalin today said, ‘Tamilnadu government is committed to provide all baisc infrastructure facilities for the betterment of the industry’.

Delivering the key-note address at the South India Media and Entertainment Summit organised by CII-Dakshin here, the Chief Minister said, ‘the cinema industry is slowly limping back to normalcy after the Covid pandemic. It is one of the most important industries in the country’.

‘It can’t be classified as a mere entertainment industry. It provides employment opportunity to millions of workers.’
Stating that this is the first film event that he is taking part after assuming the charge as Chief Minister last year, Stalin said, ‘I had been to Dubai and Abu Dhabi a few days ago to lure investments for the State. Happy today that I am taking part in a mega event organised by the film industry’.

Though I am a Chief Minister today, I have a close association with cinema. I have produced a few small-budget films. Also evinced interest in acting and did few projects. Look at me not as a Chief Minister but as one among the film fraternity.’

DMK and cinema cannot be separated, Stalin said and added, ‘From my father M Karunanidhi till my son Udhayanidhi Stalin, we have a close association with cinema. Nothing can separate my family from the film world.’

‘Cinema has seen lots of changes. It has come to our mobile phones. We should reward and appreciate good films. South Indian cinema has shown the way for rest. We have a rich past. Hence the State government is committed to provide all basic infrastructure facilities for the betterment of the industry’.

Appreciative of ‘No Smoking’ and ‘Stop Drinking’ slides being shown before every movie, the Chief Minister said, ‘The menace of consuming gutkha and ganja should be fought through films. Evils of falling for those unhealthy practised should be highlighted’.

Filmmakers have responsibility and they should do works that would awaken the society and fight all social evils with progressive thoughts’.

Through keynote talks, panel discussions and fireside chats, this summit will lay the roadmap for the resurgence of the M&E sector. The summit will have the presence of CEOs, Artistes, Exhibitors, Producers, Startups, Visual Effect Heads, Editors of dailies and magazines, Presidents of OTT platforms and writers, say CII office-bearers.

Those who were present at the summit include directors Mani Ratnam, S.S. Rajamouli, B Sukumar, actors Jayam Ravi, Ramesh Aravind, and Jayaram.

Tags:'Tamilnadu government is committed to provide all baisc infrastructure facilities for the betterment of the industry'.Chief Minister MK Stalin today saidUrging filmmakers to come out with films that awaken the society