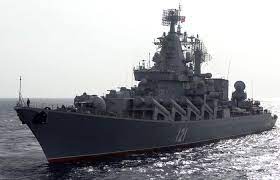 Moscow : The flagship of Russia’s Black Sea fleet, a guided-missile cruiser that became a potent target of Ukrainian defiance in the opening days of the war, sank Thursday after it was heavily damaged in the latest setback for Moscow’s invasion.

Ukrainian officials said their forces hit the vessel with missiles, while Russia acknowledged a fire aboard the Moskva but no attack.

The loss of the warship named for the Russian capital is a devastating symbolic defeat for Moscow as its troops regroup for a renewed offensive in eastern Ukraine after retreating from much of the north, including the capital, Kyiv.

In his nightly video address to the nation, President Volodymyr Zelenskyy alluded to the sinking as he told Ukrainians they should be proud of having survived 50 days under attack when the Russians gave us a maximum of five. Listing the many ways Ukraine has defended against the invasion, he noted those who showed that Russian warships can sail away, even if it’s to the bottom of the sea. It was his only reference to the missile cruiser.

The Russian Defense Ministry said the ship sank in a storm while being towed to a port. Russia earlier said the flames on the ship, which would typically have 500 sailors aboard, forced the entire crew to evacuate. Later it said the blaze had been contained.

The Moskva had the capacity to carry 16 long-range cruise missiles, and its removal reduces Russia’s firepower in the Black Sea. It’s also a blow to Moscow’s prestige in a war already widely seen as a historic blunder. Now entering its eighth week, the invasion has stalled amid resistance from Ukrainian fighters bolstered by weapons and other aid sent by Western nations.

During the first days of the war, the Moskva was reportedly the ship that called on Ukrainian soldiers stationed on Snake Island in the Black Sea to surrender in a standoff.