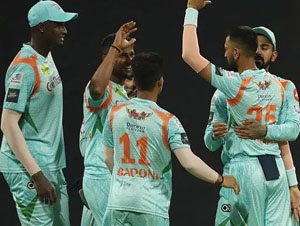 Mumbai : Mumbai Indians have surrendered timidly in the end as they suffered a record-extending eighth defeat in a row. Defending 168, Lucknow Super Giants bowlers restricted MI to 132/8 in 20 overs to register a comprehensive 36-run victory at Wankhede stadium. It was LSG’s fifth win in 8 games and they jumped to fourth in the latest IPL standings.

KL Rahul, Player of the Match, said, ‘ Will have to make up for all the over rates and fines I’m getting (with his Player of the Match awards). Trying to play according to the situation, see what’s expected out of me. Enjoying batting, enjoying the responsibility. Fingers crossed I can keep doing the right things. First thought was just get bat on ball, feel good, get that single.

When you’ve played in a venue that’s been good to me previously, but not so much in the last two games, just wanted to get that single first. Lucky that I could score as much as I did. I try and assess the pitch and conditions and see what’s best I could do for the team.

With this team, we do bat deep. Holder is batting at eight. With the depth, you can play a bit more freely. That’s probably the only reason (for his higher strike rate). Teams that can defend well, or bowl well in the powerplay and finish off well in the death overs are teams that have won the tournament. We were very clear going into the auctions – I’m big on having allrounders in the team. Having them in the team, makes my life easier with the options’.

Krunal Pandya, said, ‘ Feels really good, a hard-fought effort in the bowling department, the planning was there and the execution was also there. It was a terrific knock, leading from the front and got us to a respectable total, so all credit goes to him (KL Rahul).

I had no idea about how the wicket was going, when we batted KL was mentioning that wicket was stopping a bit so we tried to bowl slower and ball that hard length for the new batters. Really happy for Chameera and for us it is important to get better as individuals and as a team. Mohsin is a bright prospect, he has pace and variations and for him a first game like this will boost his confidence. I was so thankful that I got his (Pollard) wicket otherwise he would have eaten my brain throughout my life because he got me out and now that it’s 1-1 at least he will speak less.

Honesty is important in the team and these guys (coaching staff) are doing pretty well and ensuring everyone is getting better. For me process is important and we want to accept our mistakes and learn from it.’

Rohit Sharma, said, ‘ I thought we bowled pretty okay. It wasn’t easy. It was a good pitch to bat on. I thought that score should have been chased down, but we didn’t bat well enough. When you have a target like that, it is important to string partnerships. But some irresponsible shots in the middle, including mine. We didn’t get the momentum.

They bowled really well. We haven’t batted well enough in this tournament. Whoever plays in the middle needs to take that responsibility and go on to play long innings. Some of the opposition players have done that and that is what is hurting us. One guy needs to ensure that he bats as long as possible.

Everyone has come into discussion given how our tournament has gone. We need to ensure that we have a settled team and give players in the middle a fair chance. Their roles are different when they play for their countries and here we expect something else from them.

We tried not making too many changes, and we have tried to play the best combination possible. But when you lose games, you always have such discussions. As far as I am concerned, I want to give people enough chances to prove themselves. The season hasn’t gone the way we would have wanted it to, but such things happen.’