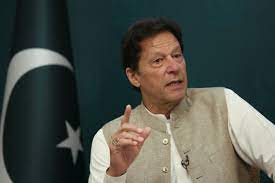 At the party workers convention in Multan, Pakistan Tehreek-e-Insaf (PTI) Chief Imran Khan said, Shehbaz Sharif has corruption cases amounting to Rs 40 billion. Imposing a government of such crooks and thieves is an insult of the people (of Pakistan), I will issue a white paper on the corruption of the Sharif clan.

Reiterating his allegation of ‘foreign conspiracy’, the PTI chief said that the whole nation about how corrupt the Sharif clan is and how they came back into power on the behest of foreign forces, reported ARY News. During the convention, Imran Khan added that he knows that politicians belonging to corrupt political dynasties will resort to his character assassination after Eid al Fitr.

Addressing the party workers, Imran Khan said, This mafia only works in two ways, either they buy people like they did (during the vote of no-confidence against him) or they resort to character assassination of their opponents. Back in 2017, they spent money on a book that was based on my character assassination, as per the media outlet.

He also accused Sharif family and their allies for driving propaganda against their opponent Benazir Bhutto and his former wife Jemima Khan. Moreover, the PTI chief also gave a call to two million people for march in Islamabad and while exuding confidence in the success of the march, Imran Khan added that at least three million people will march to country’s capital against the government.