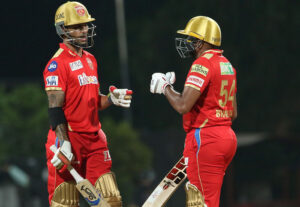 Mumbai : Punjab Kings became the second team to hand Gujarat Titans a loss when they defeated the Hardik Pandya-led side by 8 wickets on Tuesday. Shikhar Dhawan top-scored for the Kings with 62 runs.

Kagiso Rabada, Player of the Match, said, ‘ Finally we got the win. After being a bit inconsistent, we just wanted to string a couple of wins under our belt. We bowled well to restrict them. Our batters did the job. As a team, we had a good outing. You can’t get too greedy, you need to stick to your basics, that’s what I tried to do.

(On Arshdeep) He’s got a lot of nerve, he has shown that especially in the death overs. He reads the game well, he’s able to execute his skill and he’s done it game in game out. He knows what he wants to work on, I am not saying too much to him. As a bowler, you have to bowl in all stages of the game. It’s about figuring out how to be the most effective in each stage of the game.’

Mayank Agarwal, Winning captain, said, ‘ We would like to string a few (wins), no better time than getting a few wins back-to-back. We are trying to get the best out of Jonny. He’s done well opening. I said, ‘It’s okay, I’ll bat at four, I’ll anchor the innings at four’.

With Livi it was clear, Shikhar to bat through and Livi could go out and play the way he wants to play. It was nice the way he played, got the score quickly. When we got to that position, two points are almost clear, if we can score it as quickly as possible, we could also improve the Net Run-Rate. I thought we bowled exceedingly well, we got early wickets and choked them in the middle.

That really helped us to restrict them to a below-par score. The partnership between Shikhar and Bhanu was crucial for us.’

Hardik Pandya, losing captain, said, ‘We weren’t even close to a par score. 170 would have been ideal, but we kept losing wickets regularly and never came anywhere near it. I backed ourselves with the bat, batting first wasn’t a wrong call, we needed to come out of our comfort zone (which was chasing targets). We have chased well in this tournament, if required (later on in the tournament), we had to know how to set targets.

This is part of a learning curve, but this is all about learning to come out of our own comfort zone. We were always talking about getting better even when we were winning, we would talk about things that didn’t go our way (today) and would look to come back better in the coming games. We have another game in a couple of days, we need to regroup, winning and losing is a part of sport.’