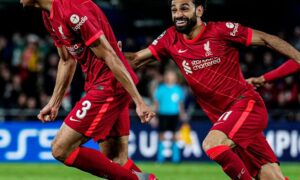 Madrid :   Liverpool recovered from 2-0 down to win at Villarreal in their UEFA Champions League semi-final second leg and progress 5-2 on aggregate, reaching a third final in five years. Second-half goals from Fabinho, Luis Diaz and Sadio Mane sent Liverpool to the final after they had trailed 2-0 at the break in Spain.

The general consensus was that Villarreal needed to score first, preferably early on, and they did just that in front of an ecstatic Estadio de la Ceramica crowd. Pervis Estupinan’s arcing cross in the third minute caught Liverpool out at the back post with Etienne Capoue prodding the ball back for Boulaye Dia to tap in.

Jurgen Klopp’s men were uncommonly flustered in possession and Villarreal exploited their nervousness again four minutes before the interval to level the tie. Capoue was again the creator, turning adroitly on the byline before clipping a cross to the back post, where the towering Francis Coquelin escaped the attention of Trent Alexander-Arnold to glance in.

However, Unai Emery’s men could not maintain their intensity after half-time and Liverpool turned the tide. Alexander-Arnold’s deflected shot had already clipped the bar before Fabinho struck in the 62nd minute, drilling his low shot through the legs of Geronimo Rulli. It was a blow from which Villarreal never recovered.

Five minutes later, half-time substitute Luis Diaz levelled on the night by heading in Alexander-Arnold’s cross and Sadio Mane galloped away to complete the turnaround after reaching a through ball before the onrushing Rulli. Capoue’s late red card compounded the hosts’ misery.