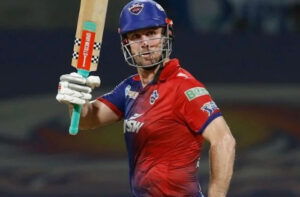 Mumbai : Mitchell Marsh scored 89 off 62 and David Warner scored his fifth half century of the season and a 144-run partnership between the pair helped Delhi Capitals chase down a target of 161 with eight wickets and 11 balls to spare in a crucial IPL game.

Marsh, Player of the Match, said, Was a tough game. Physically it’s tough when you bowl a bit and bat a bit. Slower balls and cutters, they were tough to score. 160 was par. But it’s about one good partnership. The first four-five overs of powerplay were about as tough a batting as I’ve had in T20 cricket. It was swinging, bit of seam there and there was bounce. Reminds me of Perth Stadium this wicket. Felt like the last couple of games I’ve got back to hitting the ball like I wanted to. I honestly thought I smashed it first, wasn’t worried one bit. Which is probably a good thing because I tend to look guilty when I think I’m out.

Pant, DC captain, said, Very close to a perfect game. Always believe there’s room for improvement. When you know the wicket is going to turn, little bit not much, there’s an opportunity to both bowl first or bat first. In the toss I said anything around 140-160 would be good for us, and we got 160. Destiny is always on your hands, you can look to give 100 percent. Fielding wise we can be better. He got typhoid or something like that (talking about Shaw), doctor told me that.

David Warner said, Feels good to get across the line. How good was Mitch there! Came out there and started positive. We just told him that if he can get an 80 or 90, he can games for us. Bowlers did a great job too. It was a bit two-paced, that hard length wasn’t easy to hit. Some bounced a bit extra. It’s important (to win big) as net run rate is a big factor with many teams in the race for those spots. Everyone is in good spirits and this is a great win for us.

Sanju Samson said, ‘Very disappointing night. We were few runs short, and few wickets short in the middle. While we were batting the wicket was two paced. We were 15-20 runs short. While bowling second we dropped a few catches. Really disappointed, but we would like to come back in the next game. I never thought it (Marsh’s lbw) could have been pad, we thought it came off the bat. We need to come back stronger after losing any game in IPL, and I hope we come back stronger. We have done that in the past. Hetmyer will be back soon.’