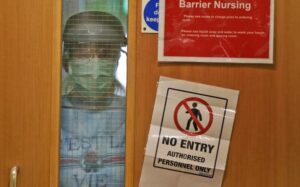 London : The World Health Organisation (WHO) has issued an warning that more cases of the monkeypox virus could be reported in Britain. An investigation is underway by British health officials to detect the cause of the outbreak which has hit mainly London, now affecting nine people, Xinhua news agency reported. Based on currently available information, infection seems to have been locally acquired in the United Kingdom. The extent of local transmission is unclear at this stage and there is the possibility of identification of further cases, the WHO added.

Three cases from the same household were initially confirmed on May 6, followed by four more cases a few days later. Two additional cases, one in London and one in the South East of England, were also detected. The latest cases bring the total number of monkeypox cases confirmed in England since May 6 to 9, with recent cases predominantly in gay, bisexual or men who have sex with men (MSM), the UK Health Security Agency (UKHSA) said Wednesday night on its official website. The four laboratory confirmed cases were reported amongst people who attended a Sexual Health clinic with a vesicular rash illness in gay, bisexual, and other men who have sex with men (GBMSM), the WHO statement said.