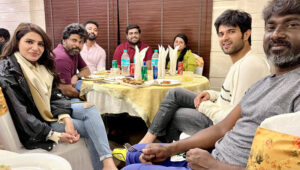 Kushi, a romantic love story directed by Shiva Nirvana, stars Vijay Deverakonda and Samantha Ruth Prabhu as the lead pair . The first schedule of Samantha-Vijay Deverakonda’s upcoming romantic comedy, Kushi, wrapped up in Kashmir. The director of the film Shiva Nirvana, took to Twitter to share the news along with a picture from the sets.

Produced by Mythri Movie Makers, the film also stars P Murali Sharm a, Jayaram, Sachin Khedakar, Saranya Pradeep, Vennela Kishore, and others. The music director for this multilingual film is Hesham Abdul Wahab, and it is set to be released on December 23.

Tags:Samantha all happy about Khushi