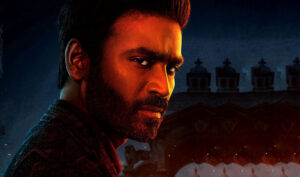 Netflix released the character posters of one of the highly anticipated films of this year — The Gray Man. The trailer of the film, which stars Chris Evans, Ryan Gosling, Ana de Armas and Dhanush, will release later today.

The film will release on Netflix on July 22. The character posters see the actors in intriguing avatars and Dhanush, particularly, sports an intense look. The actor shared the poster on his official Instagram handle. The Russo Brothers movie is based on the novel of the same name by Mark Greaney, The Gray Man revolves around a cat-and-mouse chase that ensues between the characters of Ryan Gosling and Chris Evans.

Ana plays a CIA agent in the movie, meanwhile, Dhanush’s role in the film is still unclear. The text on his character poster reads -‘Lethal Force’. Dhanush is the second big name from India to feature in a Russo Brothers project. Global icon Priyanka Chopra is currently shooting for their Amazon Prime Video web series Citadel, which also stars Richard Madden in the lead role.