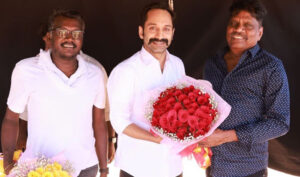 Acclaimed Malayalam actor Fahadh Faasil joined the sets of Udhayanidhi Stalin starrer Maamannan. Reports say that he will sho for next 20 days. Maamannan, directed by Mari Selvaraj is touted to be Udhay’s last film in his career before shifting his focus completely to politics.
The film has Keerthy Suresh playing the female lead and has music by AR Rahman. Vadivelu, who is playing a crucial role, has been shooting for the film actively and will also be a part of this schedule, say sources.
Tags:Fahadh Faasil begins shoot for Maamannan