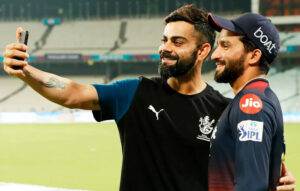 Kolkata : Following Rajat Patidar’s match-winning hundred against Lucknow Super Giants in the Elmininator, Royal Challengers Bangalore (RCB) star Virat Kohli said on Wednesday that what the young batter did is very special and one should understand the excellence of his knock.

RCB defeated LSG by 14 runs in the Eliminator clash of IPL 2022 here at Eden Gardens in Kolkata on Wednesday. While talking to Patidar about his innings in this must-win match of playoffs. I have seen many great innings but I haven’t seen many innings better than the one Rajat played. He was under pressure in this big match and he is the first uncapped player in the history of IPL to score a ton in playoffs.

What he did was very special and I don’t think that anyone should take it for granted, one should understand the excellence of his innings and appreciate it as a cricketer, said Virat in a video posted by IPL. Patidar got the fastest century by an uncapped player in the history of the tournament. He hit his ton in 49 balls and finished the innings with a score of 112 off 54 balls.

There was no such pressure on me when I came out of the dugout to bat because I have confidence in me that if I play good shots and build a partnership where I will help my team to make a good score. I have faith in me that if I just hang in there then I can cover up dot balls any time and score good, said Patidar in the video.

Usually I bat till 13 to 14 overs but my role was different in the match. I have to save my wicket and keep scoring and go till the last over of the innings. In the last of the video, Virat praised the bowlers as he believes that they played a major role in winning the match. Can’t wait to play two more games and hopefully we will win that and win the title as well, he added. RCB will now face Rajasthan Royals in Qualifier 2 at Narendra Modi Stadium, Ahemdabad today for a place in the final against Gujarat Titans.