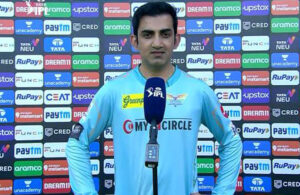 Kolkata: Lucknow Super Giants’ mentor Gautam Gambhir has thanked the fans for their support and said the team will bounce back strongly after losing in the Eliminator match in its maiden campaign in the Indian Premier League (IPL).

First-timers Luckow Super Giants did exceedingly well in IPL 2022 by finishing third in the preliminary league and though they lost to Royal Challengers Bangalore in the Eliminator match on Wednesday night, can take heart from their campaign.

Gambhir played a key role in the campaign as he spoke to the players at regular intervals before and during the campaign, guiding them as they unearthed talents like Ayush Badoni. Gambhir, who has led the Kolkata Knight Riders to the IPL title twice, took to social media to praise the team for a great tournament.

Hard luck today but a great tournament for our news team. We’ll come back stronger… Until we meet again! Gambhir wrote in an Instagram post that accompanied a picture of him watching an LSG nets session. Gambhir was in the dugout when LSG fell short in their chase of the target of 208 and lost by 14 runs.