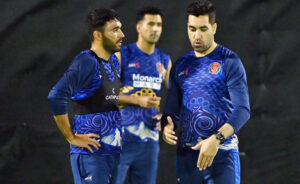 Kabul : Former Pakistan pacer Umar Gul on Wednesday has been appointed as the new bowling coach of Afghanistan. Gul will begin his new role during the white-ball tour of Zimbabwe in June, when Afghanistan will play three ODIs followed by a further trio of T20Is in Harare.

The 39-year-old made 237 international appearances for Pakistan across formats, making a particularly notable impact in the white-ball game, taking 179 wickets in 130 ODI matches and bagging 85 in 60 T20Is with a miserly career economy of 7.19. This will be Gul’s first coaching assignment in international cricket after serving as the bowling coach of Quetta Gladiators in the 2021 season of the Pakistan Super League (PSL).

Gul will have to guide Afghanistan’s bowlers through a three-match ICC Cricket World Cup Super League series against Zimbabwe as that will help team Afghanisthan qualify for the ICC Men’s Cricket World Cup 2023. Umar Gull was the highest wicket-taker in both the 2007 and 2009, T20 Cricket World Cup. He bagged 13 wickets in seven matches in both years and impressed everyone with his skills.