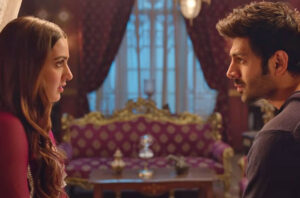 The horror-comedy has left big budget movies like Gangubai Kathiawadi and Bachchhan Paandey behind to mint moolah at the box-office.

The film has earned a cumulative total of Rs 109.92 crore within two weeks of its release.

Celebrating the same, Kartik took to his Instagram and posted a photo of himself with a wide smile.

He captioned his post, 100 crore wali smile #BhoolBhulaiyaa2, with a heart, folded hands, thumbs up and smiling emoji.

The sequel is a horror comedy that boasts of a fresh cast including Karthik, Kiara Advani and Tabu. ‘Bhool Bhulaiyaa 2’ is directed by Anees Bazmee and is produced by Bhushan Kumar, Murad Khetani, Anjum Khetani, and Krishan Kumar under the banner of T-Series and Cine 1 Studios.