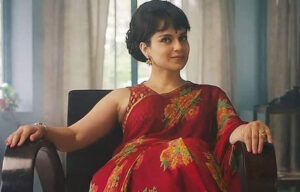 Actor Kangana Ranaut is all set resume shoot for the movie Emergency in Delhi.

Emergency is based on the life of late Prime Minister Indira Gandhi.

Kangana will not only act as the lead in the film Emergency but she will also direct and produce it. The is Kangana’s second film as a director.

Earlier, she wore the director’s hat for Manikarnika: The Queen of Jhansi.

The actress revealed that the project will be penned by Ritesh Shah, who has films like Pink, Kahaani, Jahaani 2, D-Day, Rocky Handsome among others to his credit.

He has also written Kangana’s another film ‘Dhaakad’.

In an earlier statement, Kangana Ranaut had clarified that Emergency is not a biopic, but a political drama.

She had said, It is not the biopic of Indira Gandhi. It is a grand period film.

To be precise, it is a political drama that will help my generation to understand the socio-political landscape of current India.