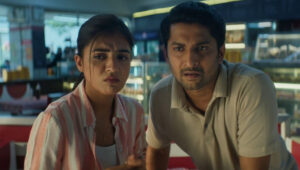 Nani and Nazriya-starrer Adade Sundara , the Tamil version of Telugu movie Ante Sundaraniki gets ready for a big release 10 June as the producers unveiled the theatrical trailer on Thursday.

The trailer continues to trend on YouTube, creating much buzz around its release. Nani and Nazriya Nazim’s portrayal of Sundar and Leela Thomas, respectively, added sparkle to the atypical love story. The Malayalam version is titled Aha Sundara. The film is being released in three languages at the same time.

Directed by Vivek Athreya of Mental Madhilo fame, the movie stars Nani, Nazriya Fahadh, Nadhiya, Harshavardhan, Rahul Ramakrishna, Suhas, and others .Speaking about the film, Nani, said, ‘It is will be a fun-filled entertainer. Audience would connect well’.

He said, ‘I always want the story to strike a chord with masses. If I find one that would appeal tp both Tamil and Telugu people, I would think about doing a bi-lingual’. Nazriya on her part, said, ‘ I am lucky to get good roles come my way. My character in the film has come good.’

Asked whether she would continue acting in Tamil, Nazriya said, ‘If I come across good roles, I will’.

Tags:Adade Sundaram trailer is out