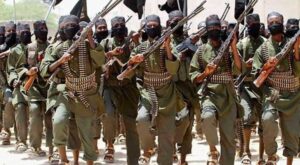 Amid controversy over suspended Bharatiya Janata Party (BJP) leader Nupur Sharma’s remarks on Prophet Muhammad, terrorist organisation Al-Qaeda in the Subcontinent (AQIS) has threatened suicide attacks in Delhi, Mumbai, Gujarat and Uttar Pradesh to fight for the dignity of Prophet. In a statement dated June 6, 2022, the terror outfit has said that the saffron terrorists should now await their end in Delhi and Bombay and in UP and Gujarat.

The offenders of the Prophet Muhammad, the pride of humanity, shall find no amnesty or clemency, no peace and security will save them and this matter will not close with any words of condemnation of sorrow, the threat letter read.

They shall find refuge neither in their homes nor in their fortified army cantonments. May our mothers be bereaved of us if we do not avenge our beloved Prophet, it added.

We shall kill those who affront our Prophet and we shall bind explosives with our bodies and the bodies of our children to blow away the ranks of those who dare to dishonor our Prophet, the Al-Qaeda in the Subcontinent said.