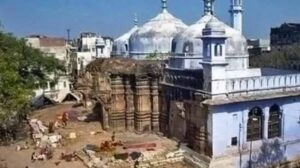 Judge Ravi Kumar Diwakar who had ordered the video survey of the Gyanvapi mosque complex in Varanasi informed the Uttar Pradesh authorities that he had received a hand-written threat letter. In a letter to the Additional Chief Secretary (Home), Director General of Police (DGP) and the Varanasi Police Commissionerate, Diwakar said he received the letter, purportedly written by Kashif Ahmed Siddiqui on behalf of the Islamic Aagaz Movement, via registered post. Varanasi Police Commissioner A Satish Ganesh confirmed the receipt of the letter by the judge.

Deputy Commissioner of Police Varuna is probing the matter, Ganesh said. A total of nine police personnel have been deployed for the security of the judge, the police officer said.