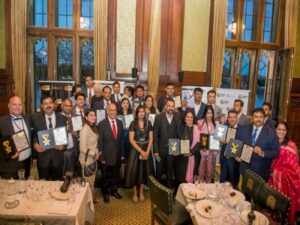 Chennai : After winning a slew of accolades and awards domestically, the Bharath Institute of Higher Education and Research (BIHER) received a rare honour in the United Kingdom. The deemed-to-be varsity was conferred with the Asian UK Award 2022 at a ceremony held recently at the UK’s House of Commons in London. The award was received by the President of the Chennai-based Group of educational institutions, Dr J Sundeep Aanand, a BIHER release said today. Dr Aanand received award for Best Edupreneur, for his impeccable track record in educating thousands of students and ensuring they get employment opportunities
in the biggest companies the world over.

While former Union Minister for External Affairs and senior Congress leader Salman Khurshid was part of the awards ceremony, the citation was given to Dr Aanand by Virendra Sharma, an Indian-origin Member of Parliament in the House of Commons. BIHER was awarded for having one of the most robust systems of promoting Industry-Academia relations, as evidenced by their robust NIRF rankings over the past few years. Aanand also announced that the Bharath Group would create a program to fund and assist 100 deserving, underprivileged students pursue research grants abroad and create intellectual growth for India and Tamilnadu, over a period of time. “No student studying in any of our group institutions should ever feel that theycannot do research overseas for lack of funds. We will help disadvantaged students with great ideas travel and conduct research and make us all proud,” he said. Currently, the Bharath Group of Institutions has MoUs with 30-plus international universities, including the University of California, Berkeley and Cornell University.