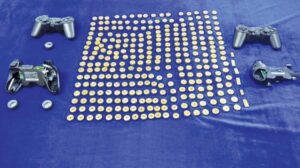 Chennai: Officials of the Customs Air Intelligence Unit (AIU) today seized 517 gms of gold and assorted electronic goods totally valed at Rs 30.13 lakh from a passenger, who arrived from Dubai at the Anna International airport here. A release from the Office of the Commissioner of Customs said based on intelligence, AIU officers intercepted a the passenger Sh.Mohamed Kasim, a resident of Chepauk in Chennai city, who arrived from Dubai by Emirates Airlines flight at 0240 hrs. On search of his person and baggage, five gold cut bits and gold foil were found ingeniously concealed inside the refurbished phones and playstation-4 and a crude gold chain was found in his possession.

The recovered, gold totally weighing 517 gms and valued at Rs.24.13 lakhs and un-declared assorted electronic goods valued at Rs six lakhs were seized under the Customs Act, 1962. The Passenger was arrested. Further investigations are under progress, the release said.

Tags:Huge haul of gold at airport