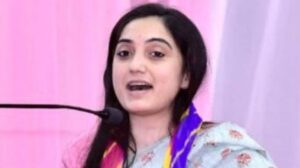 The Nupur Sharma controversy continues, now with news of protests outside Delhi’s Jama Masjid being reported. Protests erupted after the Friday prayers, with people demanding the arrest of suspended BJP spokesperson Nupur Sharma over her controversial remarks on Prophet Mohammed, police said. A large crowd of people gathered on the steps of the famous mosque, carrying placards and shouting slogans against Sharma and Naveen Jindal, former head of the Delhi BJP’s media unit.

There was heavy security deployment to manage the situation and avoid any untoward incident.

‘We demanded the arrested of Nupur Sharma for her remark on Prophet Mohammad. It was a peaceful protest, and people left the area after a while,’ said a protestor.