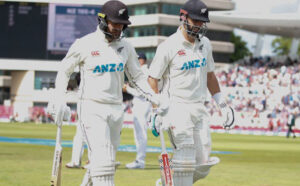 Trent Bridge : Daryl Mitchell’s unbeaten 81 helped New Zealand to 4-318 on the opening day of the second test against England.

Mitchell put on an unbroken stand of 149 with Tom Blundell (67) to blunt England’s attack at Trent Bridge on Friday, just as the hosts looked to be getting on top after putting New Zealand into bat.

Henry Nicholls (30) and Devon Conway (46) departed in the space of three overs midway through the second session to catches behind off Ben Stokes and Jimmy Anderson, respectively.

The same bowlers had removed openers Tom Latham – the stand-in captain – and Will Young off successive balls after New Zealand’s reached 84 without loss.

Young (47) edged Stokes to Zak Crawley at second slip and Anderson enticed a mis-hit pull shot from Latham that sailed into the hands of Matthew Potts at midwicket for 26.

Nicholls and Conway added 77 before Nicholls – dropped on 16 by Crawley in the slips – edged Stokes to wicketkeeper Ben Foakes.

Foakes had another simple catch to remove Conway following an inside edge off Anderson, but Root’s catching left much to be desired.