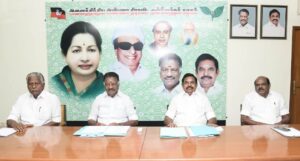 Ahead of general and executive council meetings of the AIADMK on 23 June, the main Opposition party in the State convened a meeting of its district secretaries at its head office here today.

The meeting discussed about conducting general and executive council meetings and reviewed arrangements for the same. It was decided to give photo identity cards to all those participating the meetings on 23 June.

Party’s interim presidium chairman A Tamilmagan Hussain will chair the meeting set to commence at 10 am on 23 June at a private wedding hall in Vanagaram near Chennai.