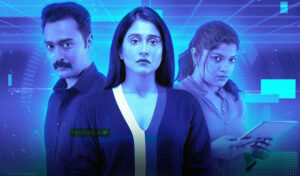 Actor Prasanna, who plays a cop in the upcoming web series Fingertip Season 2, says he was down with Covid and was in isolation when director Shivakar approached him for the project.

Talking to the media at a press conference organised by the makers of the web series, Prasanna said, I am working with Regina Cassandra after almost 17 years. We worked in the Tamil film ‘Kanda Naal Mudhal’ 17 years ago. At that time, Regina was just 14 years old and I was just 20.

On a serious note, he said, Last year, when I was down with Covid and was in isolation, I happened to watch ‘Fingertip’. I was impressed with it. A couple of days later it so happened that I received a message from director Shivakar, saying he’d like to meet me regarding a project.

I told him I was down with Covid and that I wouldn’t be able to come out. So he sent me the script and asked me to read and said we would proceed if I liked it. I loved the script and that is how I came onboard.

‘Fingertip Season 2’ is an original Tamil web series that is to be premiere on ZEE 5 Tamil on June 17.

Directed by Shivakar Srinivasan, the series is a tech thriller involving the lives of six individuals affected by the ever-changing digital space. While some are predators, some are victims of cybercrime and digital depression.