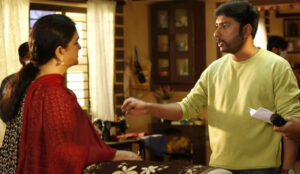 The film, featuring Balaji, Oorvasi, the late Malayalam actress Lalitha and Sathyaraj in the lead roles, will hit screens on June 17.

Produced jointly by Boney Kapoor and Zee Studios, it is the Tamil remake of the Hindi film ‘Badhaai Ho’, starring Rajkummar Rao and Bhumi Pednekar.

Karthik Muthukumar is the director of photography for the film. Its music is composed by Girishh Gopalakrishnan.