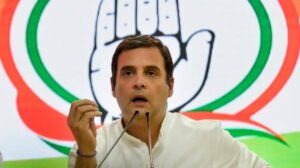 Congress leader Rahul Gandhi appeared before the Enforcement Directorate for the second consecutive day in a money laundering probe.

Rahul was questioned by the Enforcement Directorate (ED) for over 10 hours on Monday in a money laundering probe linked to the National Herald newspaper.

The probe pertains to alleged financial irregularities in the party-promoted Young Indian that owns the National Herald newspaper.

The National Herald is published by the Associated Journals Limited (AJL) and owned by Young Indian Pvt Limited.

Amid tight security and barricades, Congress leaders alleged that they were not allowed to reach the party headquarters. Traffic has been diverted in the central Delhi in view of barricading and restrictions.

Earlier on Tuesday, Randeep Surjewala at a press conference claimed that the questioning was an attempt at to muzzle the voice of opposition. He said the Congress won’t bow down.

The leaders of the BJP ripped into the grand old party. The impasse that Congress leaders and workers are doing today on the call of Rahul Gandhi, I would like to tell the country that this is not an attempt to save democracy, but an attempt to protect the assets of the Gandhi family, Smriti Irani said.

The Delhi Police also refuted claims of injuries to leaders and party workers during protests. However, it also assured action if any such incidents were confirmed.