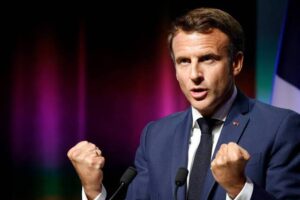 Macron was visiting Kyiv alongside German Chancellor Olaf Scholz and Italian Prime Minister Mario Draghi, in a show of support that the Kyiv government hopes will be followed by concrete action to help it in the war with Russia.

Meanwhile, a new mass grave was discovered in Kiev region with seven bodies of civilians who were shot dead, the police said.

Following the discovery of the grave on Monday, Andrii Niebytov, Chief of the National Police of Kiev region, said the “seven civilians were tortured and then brutally shot in the head by the Russians”, reports Ukrayinska Pravda.