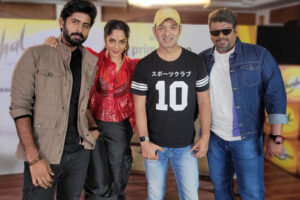 Kathir, who made a name for himself doing meaty and meaningful.roles in Tamilnadu,is popular for his performance in Pariyerum Perumal. The actor is confident that his forthcoming web-series Suzhal in Amazon Prime would fetch him greater laurels.

An investigative drama, Suzhal – The Vortex, has been created and written by the maverick duo, Pushkar and Gayatri, directed by Bramma and Anucharan.M, and features a stellar ensemble cast including Kathir, Aishwarya Rajesh, Sriya Reddy along with Radhakrishnan Parthiban, in key roles.

The 8-episode fictional crime thriller revolves around the investigation of a missing girl that wreaks havoc and disrupts the very fabric of a small town in South India.

Says Kathir, ‘I am happy to be part of Pushkar – Gayatri venture again.

Writing is the key. It speaks about Mayans Kollai. Learnt a lot working with a legend by Parthiban.

And the way everything was handled by my filmmaker’s Bramma and Anucharan gave it a new look’.

Kathir adds, ‘There is a huge respect for Tamil content across the globe. Hence Amazon Prime is releasing big Suzhal in so many languages and so many countries’.