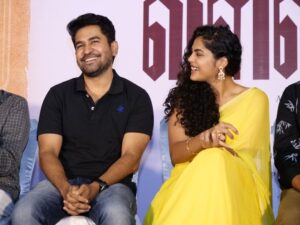 Valli Mayil is an emotional fare and is universal content would appeal to all, says director Susienthiran.

Produced by Thai Saravanan of Nallusamy Pictures Valli Mayil features Vijay Antony, Bharathiraja, Sathyaraj in the lead roles. The film is set against the backdrops of stage play in the 80s.

Addressing media recently, lyricist Vivega said, ‘I have written lyrics for a couple of songs. This is the first time, I am penning lyrics for a Vijay Antony movie after he became a hero. I am confident that the songs will be one of the greatest highlights’.

Faria Abdullah, who plays the female lead, said, ‘I embarked on my acting journey as a theater artiste. The patience and persistence of Susienthiran sir is the main reason behind this movie getting shaped in an efficient manner.

He played me the musical part while narrating the script to me. I decided to be a part of this movie banking my complete trust on his perspective. This will be a movie that will be liked by audiences from all walks of life. I request all of you to support this movie.’

Susienthiran said, I have been writing the script of this movie for past four years. It will definitely become one of the most prominent and promising movies in the pages of Indian cinema. This will be a movie that everyone can easily relate with. This movie has exploited our hard work in a great manner. Faria is playing the role of Valli Mayil. She is the soul of this movie. This movie is getting released simultaneously in various languages.’

Vijay Antony said, ‘I have learnt the craftsmanship of direction from Susienthiran while working with him in this movie. Since, I have also stepped into this domain, I have been carefully inheriting the nuances from him. There is a huge star cast in this movie. Their acting prowess are extraordinary.

D Imman is composing music for this movie, Bhaskar Sakthi is penning dialogues.