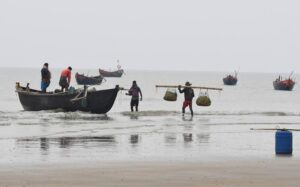 They were spotted by locals in Mandapam and alerted the Coastal Security Police who reached the spot and took them into custody.

The refugees will be lodged at the Mandapam refugee camp, police sources said.

The Coastal Security Police said the seven people are from two families. Dossnavis (40), his wife Rajini (38), and their three children are from Vavuniya district, while Mathiya (40) and her seven-year-old son are from Trincomalee.

With the latest arrivals, the total number of Sri Lankan refugees who have reached Indian shores since the economic crisis emerged in the island nation has reached 90.