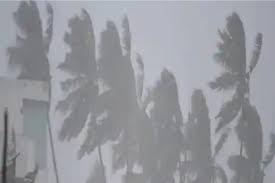 The India Meteorological Department (IMD) has predicted heavy rain in Chennai and the adjoining districts on Monday.

An upper air circulation caused the steady spell of rain which started only as a drizzle on Sunday evening that later turned into heavy showers.

Weather models also showed winds changing to westerlies, which led to thunderstorms across the city and suburbs.

The heavy rain on Sunday, according to the IMD, is an indication of more thunderstorms in the coming days in Chennai and suburbs other than the possibility of the downpour on Monday.