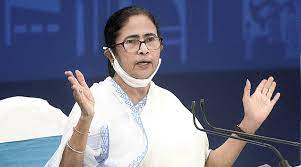 West Bengal Chief Minister Mamata Banerjee is unlikely to participate in the opposition meeting convened by NCP chief Sharad Pawar on June 21 on the upcoming Presidential poll due to prior engagements, a TMC functionary said.

A senior TMC leader will be present at the proposed meeting, he said.

“Mamata Banerjee will not be able to attend the meeting as she has some prior engagements. She has also conveyed it to Sharad Pawar ji. But a leader from our party will be present there,” a senior TMC functionary said.

During the first such meeting called by Banerjee in Delhi on June 15 to formulate a strategy for the upcoming Presidential poll, it has been decided that a common candidate, who will “uphold the democratic ethos of the country”, will be chosen as the opposition nominee.