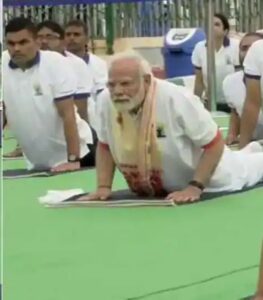 Prime Minister Narendra Modi today took part in the eighth edition of the International Day of Yoga in the heritage city of Mysuru in Karnataka.
More than 15,000 people participated in the Yoga celebrations.
Speaking on the occasion, Modi said, ‘Yoga brings peace to our society, it brings peace to our nations and the world, and Yoga brings peace to our universe’.
President Ram Nath Kovind today performed yoga at the Rashtrapati Bhawan and said that it is India`s gift to humanity. Yoga is a part of our ancient Indian heritage. India`s gift to humanity, yoga is a holistic approach to health and well-being, balancing our mind, body and soul, he said.
To mark the 75 years of India’s independence, the Ministry for Ayush identified 75 locations for Union Ministers to participate in the Yoga Day celebration.
It was during his speech at the UN General Assembly in September 27, 2014, Prime Minister Narendra Modi first floated the idea of the International Yoga Day.
Tags:Yoda YogaDay Modi India