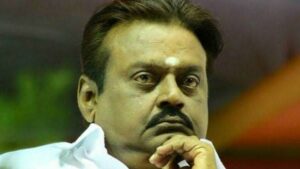 DMDK chief Vijayakanth is recovering well in a private hospital, where he underwent a surgery on Monday in which three of his toes on his right leg were amputated, sources close to the actor said.

A statement issued by Vijayakanth’s political party, the Desiya Murpokku Dravida Kazhagam (DMDK) said that toes on the feet of the actor had been amputated as per the advice of doctors.

The diabetes problem that has been troubling Vijayakanth for years had caused blood to flow in an irregular fashion to his toes, necessitating the amputation, the statement in Tamil claimed.

The actor, whose health is being carefully monitored, is recovering well, sources said, adding that he would be in the hospital for a couple of more days after which he would be discharged.

Reiterating that the actor was recuperating well, the party’s statement urged office bearers, supporters and the public not to believe rumours that were being circulated on social media about the actor’s health.