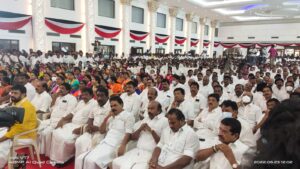 Amid heightened tussle over unitary leadership as against the existing dual leadership, the crucial general council and executive committee meeting of the Opposition AIADMK began today and Party’s interim presidium chairman A.Tamilmagan Hussain as the presidium chairman.
Partry Co-coordinator and former Chief Minister Edappadi K Palaniswami proposed the name of Hussain as the Presidium Chairman and it was seconded by senior leaders.
Next GC on 11 July
The tumultuous meeting lasted just 40 minutes and ended after Hussain in deference to the wishes of the GC members announced that the next GC meeting will be held on July 11 (Monday) at 9.15 am where a decision on the unitary leadership is likely to be taken.
Senior party leader K P Munusamy announced that all the 23 resolutions which were approved by OPS, have been rejected by the general council members. The members want only unitary leadership, he asserted. He also announced that in the next GC Palaniswami will be unanimously elected as the General Secretary of the party as per the wishes of the majority of party cadres.He said all resolutions will be passed only when the party reintroduces them along with a resolution for unitary leadership.
All about single leadership
All members rejected all the 23 resolutions and the only demand of GC members is on single leadership. When the next general committee meeting is convened, all these along with resolutions for single leadership will be adopted, Munusamy declared.
Show of strength
Though the Madras High Court had restrained making any amendments to the party bye-laws (on unitary leadership), the decibel levels were strong and high as the GC members hailed party Co-coordinator and former Chief Minister Edappadi K Palaniswami as the sole leader to lead the party.
OPS upset
A visibly upset party Coordinator O Panneerselvam -also a former Chief Minister–who did not see eye to eye with Palaniswami in the meeting walked out of the meeting in a huff midway along with his supporters, succinctly hinting that he was in no mood to accept the demand of unitary leadership headed by Palaniswami, who commanded majority support from more than 90 per cent of the GC and Executive committee members.
‘It is illegal‘
Before leaving the venue, former Minister and Deputy Coordinator R Vaithilingam, a loyalist of OPS, termed today’s meeting as illegal and said the announcement of next GC was illegal as it could not be convened without the consent and signature of OPS. He also said that ‘conspirators’ are leading the party to the path of destruction.
Tags:AIADMK EPS OPS