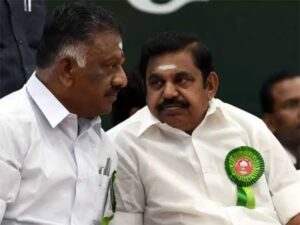 Noisy scenes were witnessed at Srivaru Venkatachalapathy Kalyana Mandapam in Vanagaram where AIADMK GC meet is on. The issue of single leadership has let loose slogans and protests among cadres since this morning at the meeting venue.
No sooner the convoy of Edappadi K Palaniswami entered the venue, his supporters raised slogans hailing him. Many protested that the vehicles of O Paneerselvam be removed from the place. EPS was received in a grand manner with bursting or crackers and showering of flowers.
Inside the hall where the meeting was scheduled to begin, OPS supporters were received with brick bats. The likes of Vaithilingam, and JCD Prabhakaran, loyal supporters of OPS, were forced to get down from the dais following angry slogan shouting by GC members.
While EPS supporters wanted to pass resolution to declare him as party leader, those rallying behind OPS wanted only 23 resolutions as accepted earlier be passed.
Tags:AIADMK GC OPS EPS