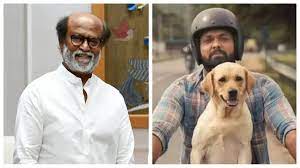 Actor Rajinikanth appreciated Rakshit Shetty over the phone, after watching director Kiranraj’s 777 Charlie, Kannada movie starring Rakshit Shetty, Sangeetha Sringeri, Raj B Shetty, Danish Sait and Bobby Simha in important roles.
Rajinikanth appreciated the entire team for their hard work and also Rakshit wrote in his twitter that Superstar expressed his for the climax concluding in a spiritual note. He wrote, ‘What an amazing start to the day! Received a call from Rajinikanth sir. He watched #777Charlie last night and has been in awe of the film. He spoke highly of the making quality, the deeper designs of the film, and especially expressed his admiration for the climax and how it concludes on a spiritual note. To hear such words from the superstar himself is beyond wonderful. Thank you so much @rajinikanth sir’.