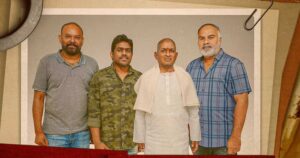 The makers announced that music maestro Ilaiyaraaja and his son, composer Yuvan Shankar Raja are on board for the film which has been tentatively titled NC22.

The team also revealed that Uppena fame actor Krithi Shetty will be opposite Naga Chaitanya.

Meanwhile, Naga Chaitanya has the film Thank You in the pipeline.

Billed as a romantic film, Thank You is directed by Vikram K Kumar, and bankrolled by Dil Raju under the banner of Sri Venkateswara Creations.