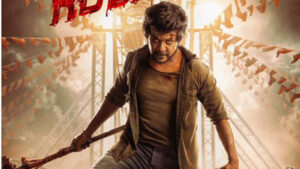 The makers on Thursday took to social media to release the first-look poster.

The poster features Raghava Lawrence in a dramatic position and is titled Rudhran which symbolises the ferocious side of Lord Shiva.

The title of the film is appropriately justified as he appears in a violent avatar when he grabs hold of his opponents.

The film is expected to be an action thriller