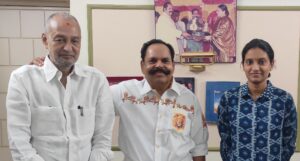 Gentleman 2, produced by K.T.Kunjumon, will have art direction by Thota Tharani.

His daughter Rohini Tharani is also working along with her father in the movie.

Bankrolled by veteran producer KT Kunjumon, Gentleman 2 is the sequel to his 1993 blockbuster film, Gentleman. While the original marked director Shankar’s debut in cinema, the sequel is helmed by Gokul Krishna who directed Aaha Kalyanam.

Gentleman 2 has music scored by MM Keeravani and cinematography by Ajayan Vincent. Thota Tharani’s daughter Rohini Tharani will also be working alongside her father for the art direction of the project.

Thota Tharani has served as art director for hit films such as Nayagan, Thalapathy, Sivaji, Rudhramadevi, Gentleman, Kadhalan, Kadhal Desam, Ratchagan, among others.