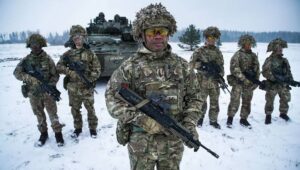 NATO Secretary General Jens Stoltenberg said this weeks Madrid summit will agree the alliances most significant transformation for a generation, putting 300,000 troops at high readiness in response to Russias invasion of Ukraine.

Stoltenberg said the military alliance’s forces in the Baltic states and five other frontline countries would be increased “up to brigade levels”, doubled or trebled to between 3,000 and 5,000 troops, the Guardian reported.

That would amount to “the biggest overhaul of our collective defence and deterrence since the cold war”, he said before the meeting of the 30-country alliance, which runs from Tuesday to Thursday this week.

The rapid-reaction Nato Response Force currently numbers up to 40,000, and the proposed change amounts to a broad revision in response to Russian militarisation.

Under the plans, Nato will also move stocks of munitions and other supplies farther east, a transition due to be completed in 2023, the Guardian reported.