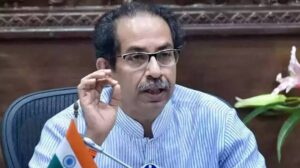 You are still with Shiv Sena from the heart, said Maharashtra Chief Minister Uddhav Thackeray in an emotional appeal to rebel MLAs camped in Assam’s Guwahati.

“Shinde only has 50 MLAs from what I have heard, so it can’t be said that he has the majority,” she said.

“Anyone who is speaking against the government is getting ED notices. Such things are not good for the country and the Constitution,” Sule said on the ED summons to Shiv Sena leader Sanjay Raut.