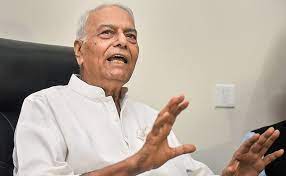 Yaswant Sinha, the joint opposition presidential candidate, will meet Chief Minister M K Stalin here on Thursday and seek the support of the Secular Progressive Alliance for the 16th Presidential election to be held on July 18.

Sinha is scheduled to meet Stalin and MPs and MLAs of the Secular Progressive Alliance at DMK headquarters Anna Arivalayam around 5pm Thursday. After mustering the support of the opposition parties, Sinha is expected to interact with the media which would be followed by a reception organized by Gandhians in the city.

Sinha, who was a minister in the A B Vajpayee led NDA government from 1999 to 2004, had resigned from the Trinamool Congress after he emerged as the face of the opposition in the presidential race less than a fortnight ago. The octogenarian bureaucrat turned politician is on a mission to meet opposition leaders across the country to garner support against NDA’s Draupadi Murmu, who had even approached the Congress leaders for her election.