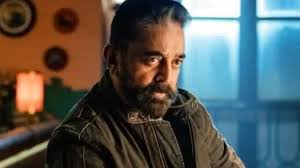 Kamal Hassan starrer Vikramwill have its OTT premiere on Disney+ Hotstar from 8 July.

Written and directed by Lokesh Kanagaraj, Kamal Haasan-Vijay Sethupathi-Fahadh Faasil-Suriya starrer Vikram had its worldwide theatrical release on June 3, 2022. From the single word ‘Aarambikkalaangala’ uttered by Kamal Haasan in the curtain-raiser teaser to the ‘Paathukalaam’ in the trailer, every single punch word has become a viral chant for his hard-core fans.

The movie had a blockbuster opening with positive reviews from critics and general audiences. ‘Vikram’ has broken several box office blockbuster records, and has become the Top grosser in Tamilnadu.

Tags:Kamal Hassan starrer Vikramwill have its OTT premiere on Disney+ Hotstar from 8 July.