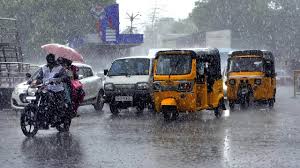 The Indian Meteorological Department (IMD) has predicted rains and thunderstorms in Chennai and suburbs during the next 48 hours.

Maximum and minimum temperatures are likely to settle at 37 degrees Celsius and 27 degrees respectively. An IMD official said hat this is due to the speed in the change of westerlies.

Meteorologists said that the westerlies pushed the thunderstorms or rain clouds forming over the interior areas towards the coast that had led to widespread rains in the city on Friday and this is likely to continue during the next 48 hours.

The weatherman also said that while the westerlies are gaining strength and southwest monsoon active over the West coast, the western ghats block the flow of winds leading to rains.

The weather department also said that there is likely good of the rains continuing for the next five days in Chennai and adjoining districts of Tamilnadu.