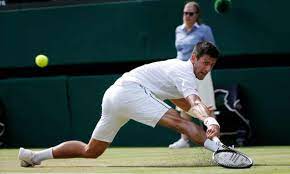 London: There was no slowing down for Novak Djokovic at Wimbledon on Friday afternoon.

The Serbian cruised to a high-class 6-0, 6-3, 6-4 third-round win against countryman Miomir Kecmanovic at the grass-court major. Having dropped just seven games in defeating Thanasi Kokkinakis in the second round, Djokovic matched that number with another sublime all-around display to overwhelm his opponent on Centre Court, breaking the Kecmanovic serve six times on the way to a one-hour, 52-minute victory.

Heather Watson reached the last 16 of a Grand Slam in singles for the first time as she overcame Kaja Juvan to reach the Wimbledon fourth round.The British world number 121 raised her arms aloft in celebration as she withstood a late Juvan resurgence to convert her first match point in a 7-6 (8-6) 6-2 win over the Slovenian.Watson, 30, plays 97th-ranked German Jule Niemeier in the fourth round.

Tags:There was no slowing down for Novak Djokovic at Wimbledon on Friday afternoon.