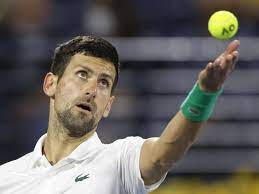 World number three Novak Djokovic has reached the quarter-finals at Wimbledon with a victory over Tim van Rijthoven on Sunday.

The Djoker sealed a commanding win in straight sets. With this victory, Djokovic now owns a 25-match winning streak on the London lawns as a three-time defending champion.

This was the first meeting between Djokovic and world number 104 Rijthoven.

The Djoker sealed his 83rd win at Wimbledon.

Norrie was backed by an enthusiastic crowd on Court One as he beat American Tommy Paul 6-4 7-5 6-4 to reach his first Grand Slam quarter-final.

Rafael Nadal put on a Centre Court masterclass to reach the fourth round at Wimbledon after beating Italian Lorenzo Sonego 6-1 6-2 6-4 as he took another step closer to winning a remarkable 23rd Grand Slam.

Unlike his previous two wins at SW19 this week, in which he dropped a set to Francisco Cerundolo and Ricardas Berankis and was far from the entertainer we know he can be, the No.2 seed was in a ruthless mood.

Annik Sinner emerged victorious in the battle of tennis’ next generation of stars as the 20-year-old defeated Carlos Alcaraz in four sets to reach the Wimbledon quarter-finals – 6-1 6-4 6-7 (8-10) 6-3.

Middle Sunday action is a rarity at Wimbledon but Centre Court played the host venue as 19-year-old and fifth seed Carlos Alcaraz, the youngest player in the men’s draw, attempted to reach his third Grand Slam quarter-final.

But Sinner was in the mood right from the off though and capitalised on far too many forehand errors from his opponent – which is usually the Spaniard’s most feared weapon.

Alcaraz found his rhythm in the third set to win a thrilling tie-breaker 10-8 but the same mistakes came back to bite him in the fourth as Sinner powered on.

Tags:World number three Novak Djokovic has reached the quarter-finals at Wimbledon with a victory over Tim van Rijthoven on Sunday.