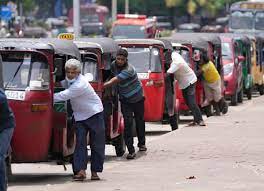 Colombo: With no fuel for transportation, Sri Lanka on Sunday declared a week-long holiday for schools from Monday.

The Education Ministry decided that all government and government-approved private schools would be given holidays from July 4 to 8.

The decision to close schools was reached after a discussion among Ministry officials, Provincial Education Secretaries, and other officials, and after considering the poor attendance of school principals, teachers and students over the last two weeks, mainly due to lack of transport with non-availability of fuel for public transport and personal vehicles.

Sending home people who were queued up for days and weeks on last Monday (June 27), the government-run Ceylon Petroleum Corporation (CPC) stopped issuing fuel to any vehicle other than those involved in essential services like health, public transportation, law and order, food distribution and etc.

Tags:Sri Lanka on Sunday declared a week-long holiday for schools from Monday.With no fuel for transportation