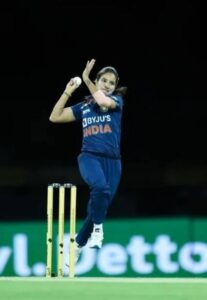 India did not have a problem chasing 174 as they the won second ODI by ten wickets against Sri Lanka on Monday. Smriti Mandhana and Shafali Verma played knocks of 94 and 71 respectively. Earlier. Renuka Singh returned with four wickets as India bundled out Sri Lanka for 173 in the ongoing second ODI of the three-match series.

Deepti Sharma and Meghna Singh also took two wickets for India. Ama Kanchana top-scored for the hosts with a knock of 47 runs.  Earlier, Harmanpreet Kaur won the toss and opted to bowl against Sri Lanka in the second ODI of the three-match series on Monday. India have not made any change to their playing XI. India would look to take an unassailable lead in the ongoing series as the side had won the first ODI by four wickets. The pitch is expected to aid the spinners again so Sri Lanka would look to put up a big total on the board.

Renuka Singh, Player of the Match, said, ‘I am working on my strengths and working on my variations. I am hitting the hard lengths which is helping me here. We decided to bowl first looking at the overcast weather. We thought the conditions will help us. I was told to stick to my strengths’.